All Of This Happened While You Were Sleeping 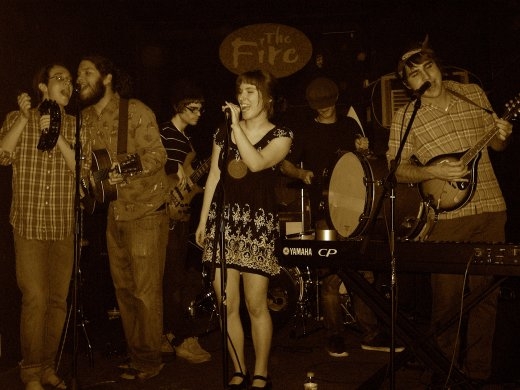 1. Country/folk outfit Perkasie might seem more at home performing in an old Texas saloon with a worn-out bar piano, but they manage to get folks at The Fire tapping their feet to a collection of catchy Southern-style tunes. Subject matter ranges from grillin’ and drinkin’ some beers to more subdued whistle-along ballads about small-town life. With alternative acts like Bright Eyes and Murder by Death making mid-career transitions into country territory, it’s refreshing to see a band like Perkasie born straight into the genre.

2. Toward the end of the set, the band makes sure to squeeze in their fan favorite, “Ginger Sobs,” complete with a dedication sent out to all the red-heads in attendance — there aren’t many, but it’s the thought that counts.
3. Lead vocalists Kate Foust and Alex Wash harmonize and trade off lyrics with an enjoyable mix of Southern energy and soulful blues on tracks like “Honey Bee” and “The Fighting Thirteenth.” Wash manages to tickle the ivories at the same time, and for a song or two makes efficient use of the mandolin for a high energy hoedown – in Philadelphia, of all places.

4. Ben Roth’s down-home acoustic twang sounds over the smooth bass lines of Danny Sadler, while Dom Billett keeps the percussion rolling along nicely (the man also drums for the Southern/metal/hardcore band Judi Rose, of which Roth is also a part). And, of course, we can’t forget Matt Kelly, who accents the performance with an additional bass drum for that extra rhythmic punch.

5. And what does the band think of itself? “If Perkasie was a woman, I’d take her out, ’cause she’s the kind of girl you can take out to dinner and then have wild sex with. You know you’re gonna have a good time,” says Foust. Do they have your attention now?

TEXT AND PHOTO BY BRIAN MYSZKOWSKI